Members of Linden Department of Public Works to be honored 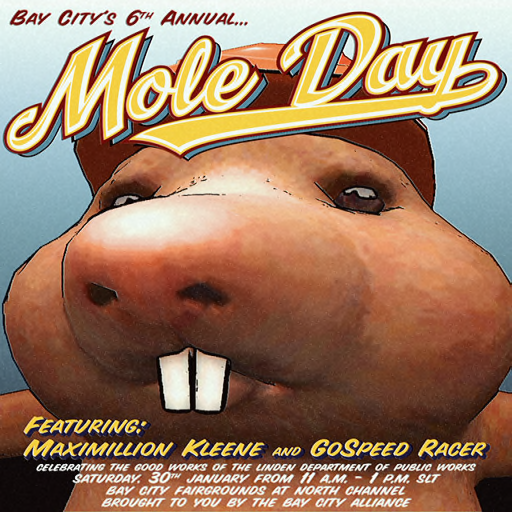 BAY CITY, SL (24th January, 2016) -  The mainland community of Bay City welcomes all Second Life® members to their annual "Mole Day" celebration on the 30th of January, 2016. The event will be held in the Bay City Fairgrounds in North Channel

Normally held on the same day as Groundhog Day, this year's Mole Day will be observed three days early, taking advantage of the weekend. The event will feature a performance by Maximillion Kleen beginning at 11:00 a.m. SLT, following by a DJ set by GoSpeed Racer at noon.

"Moles" are members of The Linden Department of Public Works (LDPW). The LDPW is a program focused on improvements related to the experience of living on, or visiting the Linden Mainland. The LDPW is a team of Resident builders, scriptwriters, and others to create new content on Linden Lab's behalf and to the benefit of all. These Residents all have have Second Life accounts with the last name “Mole.”