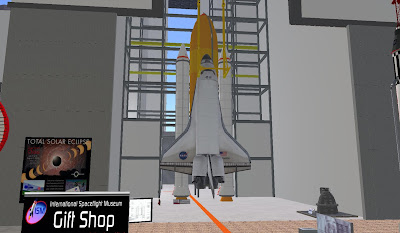 It was thirty years ago, January 28, 1986, in which the Space Shuttle Challenger exploded 73 seconds after liftoff. The event was the greatest loss of life in the pursuit of space travel at the time, matched only by the Shuttle Columbia disaster on February 1, 2003. For teenagers at the time whom were fans of the US space program (including myself) it was a blow that would weigh on their minds for quite some time. The disaster, caused by the solid rocket boosters' O rings having gotten frozen in the cold winter weather, would put America's manned space program on hold for almost three years. Before the disaster, spaceflight seemed like it was almost becoming routine, safe enough to allow "America's first teacher in space." Afterwards, the program would never be the same again (Wikipedia article). 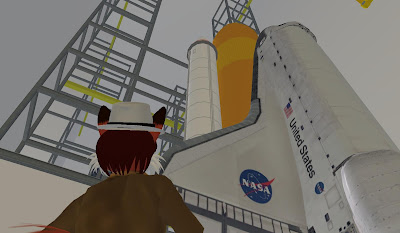 Here in Second Life, one can see a virtual replica of two Space Shuttles. They're at the International Space Museum at Spaceport Bravo (85, 120, 22).

The Space Shuttles were grounded after July 21 2011 following the landing of Atlantis (SL Newser article), the ships having brought up enough of the Space Station for smaller rockets to finish America's contributions. Since then, US astronauts have been hitchhikers on Russian space launches. With an anemic economy and persistent budget deficits, it may be many years before America once again launches men, and women, into space on it's own.