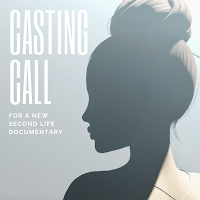 Last Friday July 17 on the Linden blog, there was an announcement for a "casting call" for a documentary on Second Life. It will be directed by Olivia De Camps, and produced by Tom Sid.

Every day, all around the world, millions of people log onto virtual worlds such as Second Life. Through a series of individual stories, this documentary aims to explore the core of basic human interaction. For many individuals, virtual worlds not only serve as escapism, but also morph into an expansion of their real life— where genuine friendships are formed, economy thrives, and often romance is built upon a virtual image that is frequently transferred to the real world. Users have the ability to immerse in the world they have always dreamed of living in, exploring their gender, racial, or sexual identity and creating strong bonds with people they might never get a chance to meet off screen. As we have been stuck at home without a possibility to physically meet, the idea of a digital world has become even more attractive.

De Camps is described as "a Dominican-American film student in her Senior year at New York University Tisch School of The Arts." Sidi is a television and commercial producer.

Through interviews (all filmed digitally due to COVID) and re-enactments on SL, we are searching for stories to tell from an experiential, non-judgmental and visually-driven way. Tell us your story! How has SL been a world for you in quarantine? Has it helped you find your identity? Did you form a special relationship on the platform If you're an artist, do you come here to share your works (design clothes, host virtual raves, digital photography)? We are looking for people who would like to share their SL experiences with us during or before quarantine. You can choose to remain anonymous if you wish.

De Camps and Sidi can be reached at oliviadecamps@gmail.com or t@boraxcfm.com .