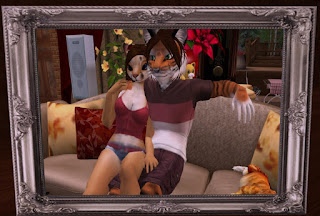 One of the Sunweaver community, Tigerclaw Apps, went missing in April last year. People wondered what happened, notably his best friend Felina Fermi. Then this week, it was revealed what happened. He had passed away.

Tigerclaw Apps, long time partner and friend to Felina Fermi, disappeared last year after the bad storm that hit the East Coast.  We had thought, it was just an outage of services preventing Tigerclaw from connecting with us. Unfortunately no.  Felina heard from Tigerclaw's brother.  Tigerclaw passed away last April, due to a heart condition. Our prayers are with Tigerclaaw's Family and with Felina, she has lost two close, dear friends now.

For Felina, it was harsh news as Tigerclaw had been her other longtime friend in Second Life besides her late partner Rypanthian Abilene. She would later ask me to meet up with her, "Both of them I knew so long, Tiger was like 20 years actually. What are the odds of both of them dying? Maybe they were only online friends, but they were the best I ever had."

"Tigers brother finally contacted me on Steam," Felina told me. He had passed on April 23, 2019. His brother had found out about Felina, but was hesitant to give her the bad news.

Felina woud make a memorial stone for Tigerclaw next to her former partner Rypanthian's at her SL home, "Some know, truth is less knew Tiger then Panth. The three of us had almost everything in common. How often does that even happen, liked same movies liked the same games? Iknew when Tony didn't show up Apr 22nd that something was wrong. At first I thought it was a power and Internet issue. Then that stretched to days, weeks, months ... Feels like a big chunk of my soul was lost with them. Tiger knew Panth well. He introduced me to him in Everquest actually."

And the Sunweavers say goodbye to one of their own.