News and Commentary: Reflections On The SL17B 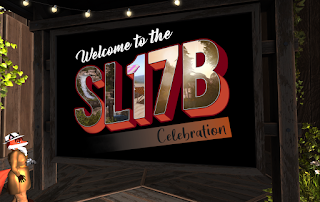 Different Second Life Birthday events are remembered for different things. The previous one, the SL16B, was "Sweet Sixteen," when Linden Lab got back into full control and had a 1950's theme, and the ending of some traditions such as the "Cake Stage," at least for now. The SL15B was our "Crystal Anniversary," and the first of the "Swaginator" gift hunts by Linden Lab, and would turn out to be the last resident-run anniversary event, and the last of the Cake Stage and Stage Left builds. The SL14B, "Carnivalesque" will be known for it's "Dragon Island" and "Stage Left" two-sim "Guardian." "Unlucky Thirteen" was lucky in some ways with Loki Eliot's tribute to a kids' game show and Madpea's "Mad Monster Island," and it's "Stage Left" then, sometimes called The Librarian. The SL12B had it's "party velociraptor" gift avatar from Linden Lab, and Linden Lab was starting to step back in the events with "Music Fest" and "Meet the Lindens."

For people, age seventeen is thought of as the last year someone's a "kid" and the year before they get some of the privileges and responsibilities of being an adult, at least in Western developed countries. "One more year and Second Life gets to vote" I would hear more than once. Maybe it's with this in mind Linden Lab chose as it's theme "Vacations and Road Trips," or "Road Trip" as I heard it called for short a few times. And this is what helped distinguish this year, allowing the resident exhibitors more freedom to build what they wanted. And people made a variety of things from the playground of Rocket City's community to Fiona Fei's "Conversation with a Stranger" art exhibit. to Suika Manamoko's Bleriot XI exhibit that was a tribute to an early aviation pioneer, and of course Silva Ametza's tropical vacation island build for the Newser's exhibit, there were many examples.

In this birthday party, the residents had more than a few gifts. The gift shop area had a number of things from clothes to a toy airplane. And there were gifts in the exhibit areas as well. The GTFO game people had a place one could get a gift car. One wasn't so much a lasting gift as a free ride rental. Teegle set up a place one could get a temporary horse or horse and carriage and ride it for as long as they wanted until they detatched it (or crashed).

One difference between this anniversary event and others in recent years was this one was taking place at a time Second Life's numbers have been rising instead of slowly falling. So there were likely more people at the SLB this time than in the past few years. This may have been the reason for some residents complaining about more lag.

At the "Meet the Lindens" events, there were no revelations that were particularly earth-shaking. There was some talk about the move of Second Life data from existing servers to Cloud servers. It was also mentioned the number of Moles in the Linden Department of Public Works was increased from about twenty to thirty due to work on Bellissaria. Work on a mobile device continues. Sansar is no longer really an issue, save for those Lindens that returned from working on it (some such as Torley apparently stayed). There are no new games in development, though it was mentioned the Paleoquest game *might* get an upgrade in the future. And new user experiences are still being examined for what works and what doesn't. The effect the Pandemic has had on day to day Linden Lab operations has been described as "minimal." The revelation that got the most attention seems to be the latest kind of Linden Home, the stilt houses. But they won't be available for some time to come.

There was much greenery and other natural scenery around, such as the forest area around the main stage. The auditorium was also different as it was a stage with an open seating area. Some liked it. Others didn't, and while I didn't personally hear it, there were likely some whom wondered if there was a connection between this and perceived greater lag. Was it really greater? I seemed to have more trouble going about the Meet the Linden events and concerts more than walking the Relay Weekend this year, crashing a lot. So my personal answer is "maybe."

And of course, there were the residents whom missed "The Cake." Nancy Clowes personally came up with a partial solution with her own SL17B birthday cake. With no Cake Stage for two years in a row, perhaps next year we'll see some cakes of some kind among the exhibits.

In any event, it was quite a "road trip." And the Newser was happy to be part of it. Special thanks once again to Silvia Ametza for her well-done exhibit. And of course thanks to the Lindens and Moles for making sure things went smoothly. And now that our "busy season" is coming to a close (we still have some things to write about), we can get back to topics that were left on the back burner.