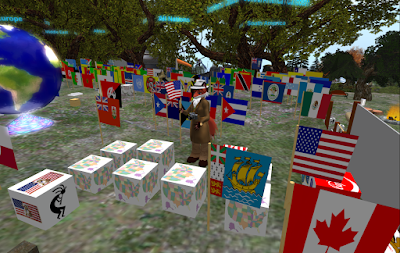 This Fourth of July, there are a number of places one can get an American flag. But there's one that not only allows you to get one for free, but also flags of most of the nations of the world, each of the fifty United States, Canada's provinces, and some international and movement flags. It's the World Peace Flag Garden, and it offers them for free.

Most every nation is represented here. There's also flags for a number of territories and islands. Some places in the news in recent years, such as Kosovo and Hong Kong, are represented. Some are not recognized by all, such as Taiwan and Northern Cypress. And there's Nepal's double-triangle. There's also a box with a modifiable flag and various textures of American Indian flags. Another box has various "Pride" flags.

The place is owned by Edd Thor, whom also owns the Thor's Oak Christian Men's Center (aka Men's Recreation Center and Chapel) next to it. There, one can pick up some free clothes, skins, and jewelry.