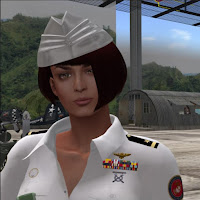 There was some sad news for Caledon and other steampunk communities in Second Life this weekend. It was announced that Autopilotpatty Poppy, sometimes known as just Poppy, had passed away a few months ago in May.


It  is with great sorrow that I announce the passing of a former Captain of RFL, Dame Autopilotpatty Poppy this past May. Patty was a resident of the Steamlands since 2006 with land and venues in Rosehaven, New Babbage, Caledon and other estates.


The "Steamlands Wiki" had this to say about Poppy in an entry presumably last updated several years ago:


Dame Poppy has been a resident of Second Life and the Nation of Caledon since November 2005. She has owned a several fine art galleries over the years including: The Gallery Tamrannoch, Sea Song Gallery, Poppy's Place Galleria, and Thistle Hill Marketplace to name a few. She has offered free gallery space to dozens of new and established artists in SL since her first gallery opened in January of 2006. She is a photographer in RL as well as in SL. In SL she specializes in unique portraiture work. She has had work on display in permanent exhibits in the AHO gallery at the NMC campus and at the 2nd Louvre Museum. She has a gallery on the ruins of Caledon Moors and on the Scotland sim of Loch Lomond Balloch. Lady Poppy is from the Pacific Northwest. Her rl floral close-up photography remarkably brings to mind the works of Georgia O'Keefe.

Dame Poppy was Knighted on her 6th Rez Day on November 25th, 2011 by Caledon's Guvnah, Desmond Shang, for her exemplary work for the Independent State of Caledon.

Lady Poppy devotes a large amount of her time to volunteer work for the Caledon community and is a friend and mentor to many new citizens of SL. She is devoting much of her time in 2012 as Co-Captain of Team Caledon's Relay for Life fund drive. She devoted her time in 2011 as Co-Captain and in 2008 assisting Erasmus Margulis, Captain of Team Caledon's hugely successful RFL fund drive for the 2008 season. (Team Caledon came in 2nd overall with more than 3.04 million $L in 2008.)


In 2017, the Newser would write about the Rusty Garter Saloon, which Autopilotpatty played music at as DJ Poppy. A page in the NAS blog stated she had been DJing there as well. Her passing was listed as May 9.

The notice about her passing also stated, "There will be a memorial dance celebration in her honor on Saturday, July 18 from 2-4pm at Chateau Trikassi in Rosehaven. More info to come."