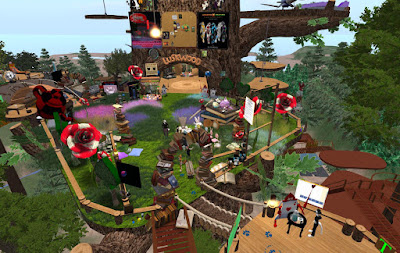 Luskwood has gone down the rabbit hole, so to speak.


Heading over to the Lusk sim, I found Luskwood's "Big Tree" had been decked out in the style of "Alice in Wonderland." There were playing card guards. There were books all over the place, including
a couple arches made out of them. There were large roses in places. There was a tea cup with hot tea the size of a hot tub. And there was a tea party setting, with table and chairs and teapots and goodies.

Besides the Wonderland-themed decorations, there are others. In the posters, some were old ones from events long ago, though there was one advertising the SLPonycon in June. There was also a picture poking playful fun at one of the Luskwood founders. And as always, there are the avatar vendors inside the tree, and the games in the back.

It's unknown how long this new look will be up for. Possibly for another month. But for fans of Luskwood whom are interested in seeing what's new, it's a good time to drop by and have a look.

Luskwood is Second Life's oldest furry community, and possibly the oldest one that's still around.