News and Commentary: Mixed Reaction to Buyout of Linden Lab


Well, that was a surprise.

Occasionally, there's a rumor that Linden Lab is talking to someone behind the scenes in negotiations to sell Second Life or be bought out. This was especially the case in 2010 in the months following the layoffs of a third of the staff. But while the Lab has made deals with other companies, the last time having sold Sansar to Wookey, there have been no negotiations about either the ownership of itself or Second Life (at least officially). That is until yesterday when in a Press Release, Linden Lab announced it had been "Acquired" by a group of investors. 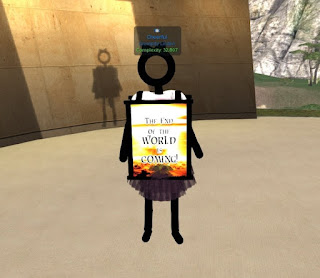 It didn't take long for news to spread, and there's been no shortage of comments, such as the thread in the official forums. There's no shortage of predictions of doom, "Second Life is dead." "We're so screwed." "Damn I cannot believe it, after 13 years its time to say good bye, I guess, that sucks. I mean you put 13 years of your life into something and wham its gone just like that."

And there's more than a little pessimism, "But after being let down by Blizzard, Bioware and Bethesda, I'm usually not rooting for any company to get investors on board nowadays." "This is worrying indeed, I've always been more in favor of a company remaining independent from outside influences, and this is basically... the opposite." "Investment groups are typically parasites that contribute very little while sucking companies dry."

Some others were more optimistic, such as those pointing out Linden Lab founder Philip Rosedale quoted as saying, "I’ve known Brad for 14 years personally and professionally, and I’m confident he will bring his passion and proven strategies to help Linden Lab achieve new heights in distribution, scale, and quality while remaining true to the original vision, creativity, and community that makes Second Life unique and special.” And then there was the track record of Oberwager, "My ... thought was that this fellow buying the outfit seems to have more business success (with this sort of better Task Rabbit thing called Jyve) and more experience than the past lab technicians, and that's a good thing."

And there were those suggesting it was too soon to make conclusions, "I need to wait and see what Ebbe has to say from his side on this to us the users of SL before I get overly excited." "I've worked for several companies that got taken over by investment companies.  What happens next falls into two categories ... Things run smoothly for a year or so, then the investment company starts asset stripping piece by piece. ... The investment company...invests.  They take a loss on the initial purchase, a loss on the initial investment but have a road plan to regain that investment back in 2 to 5 years. ... THIS is the kind of investment company we can hope has taken over Linden Research, the type of company who are in it for the long haul. We will find out (probably by the beginning of next year) if the investment company who took over is path 1, or path 2." "After careful consideration, I have decided not to freak out just yet."  "Hope for the best. Plan for the worst. Expect nothing.That's it. Speculation is lovely and all but being panicked will not help whatsoever."

And of course there was humor, "I guess that guy that's been perving us all and IMing with only 'hi' all these years finally got the money to buy the thing."

It was also suggested that the negotiations for the buyout were the reason that there were no big revelations in the Meet the Lindens event at the Second Life Birthday this year. 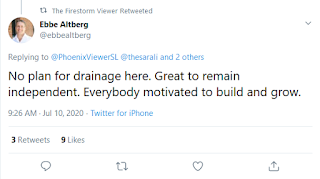 Ebbe Altberg/Ebbe Linden would try to answer these concerns from residents on Twitter, saying Linden Lab was free to make it's own decisions, "No plan for drainage here. Great to remain independent. Everyone motivated to build and grow."

Brett Linden would finally step in the thread with his comments, "A few folks are speculating that this is the end of SL and nothing could be further than the truth. Any talk of dismantling or radically changing the fundamentals of SL that we know and love is inaccurate. While we can't get into specific details about the deal itself, I want to emphasize the fact that this keeps Linden Lab as an independent venture led by two investors who have a great deal of awareness about what SL is and isn't. They are excited to join and help us grow both SL and Tilia while also respecting and recognizing the needs and sensitivities of the existing culture and community. " When asked when more information was forthcoming, he answered, "We look forward to being able to share more as soon as we can and I know that Brad (Oberwager) is eager to meet the community as we get closer to the closing/approval date." Bret would go on to say that Oberwager would get an avatar and come inworld, for the Lab Gab show and meeting people elsewhere inworld. A couple Lindens, including Grumpity, would poke fun at the doom and gloom by wearing signs proclaiming "The end of the world is coming!"

My own opinion? In short, I tend to agree with those whom argue "wait and see." After being part of this virtual world for over thirteen years, I've seen my share of people of people predicting the end whenever something big happens. But I do see signs of optimism. That Oberwager is planning to come inworld to discuss things is a good sign. So are the Lindens with their "End of the world" joke signs. If they weren't optimistic, I doubt they'd be kidding around. Of the two people, one a member of Mensa, the other whom has an interesting success story with Jyve, it's obvious they're smart businessmen. That one plans to come inworld shows at least he wants to talk to his new customers.

On the other hand, there are enough acquisitions that went badly, or had mixed results. So those with dim outlooks don't have to look too deeply for evidence to support their conclusions.

So why did Waterfield and Oberwager's group of investors buy out Linden Lab when the company couldn't find a buyer in 2010, assuming the rumors were true? Well, Second Life's glory days were from 2006 to 2008. By 2010, it was clear the place wouldn't be drawing as many people as it once did for quite some time to come. Today, the world is under a global pandemic that has send many places into lockdowns and quarantines, and even in places that aren't people are discouraged from meeting up or going to crowded areas. The result is people are spending more time online, and more are coming here. Our future, at least for the near term, is looking brighter. And this is what financial investors are looking for.

In a sense, this sale marks Linden Lab finally becoming a success story in the eyes of the tech world. It's been commented on that one of the reasons Second Life wasn't considered one was it was never bought up by a larger company. And now, Linden Lab has been bought out under what look like generous terms. Not that Second Life's residents/customers cared much about what those people thought.

In any event, Linden Lab, and Second Life, are entering a new era. How it turns out, we'll need to wait several months at least, maybe over a year, before we can really say it was for the better or worse.