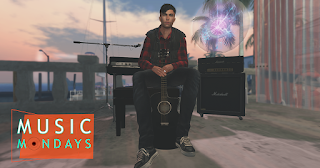 Last week, Tara Linden announced there would soon be a weekly post in the official blog, "Music Mondays."

We are very excited to announce a brand new initiative that aims to highlight the many talented musicians of Second Life. Our virtual world has a thriving community of artists who span a vibrant range of styles. At any moment in Second Life, you’ll find live music performances occurring across the many clubs and venues that are a key part of the fabric that makes up the Second Life community. We feel that the music scene in Second Life deserves wider recognition and promotion -- and that’s why we’ve created Music Mondays.

Tara would go on to add the Lab would try to make the residents more aware of the music scene and feature some musicians in it's "Lab Gab" show.

On Monday July 13, Tara would start the series with Quartz. Quartz answered a number of questions, such as, "What aspects of the SL music community are the most meaningful to you?" He answered, "The support of the fans in SL for live music and the arts. In RL, it's so hard to generate an audience appreciative of performing artists to come to the shows. I have some really great fans that come out consistently and support me & the SLive Music venues. I'm very grateful for all of them. I've been told I have some of the best fans out there by venue owners. That makes me very happy."

For the complete interview, Click Here.
Posted by Bixyl Shuftan at 6:01 AM