Cartoon of the Day: Third Knock From The Sun 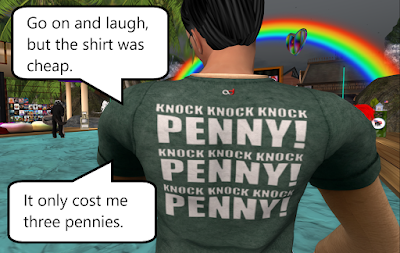 Taken at the Happy Vixen. For those who don't know, the shirt is about a reoccurring gag from the show "Third Rock From the Sun," in which one of the characters, Sheldon, has a number of quirks. Among them, knocking on the door of his lady friend Penny three times, then calling her name. Some computer geeks liked it. Others disliked it as they saw it as mocking them. Guess to avoid trouble, this guy  knocks on copper, three times.


Correction:  Turns out the name of the show was "Big Bang Theory." Oh well, I never did watch either one.
Posted by Bixyl Shuftan at 10:21 AM