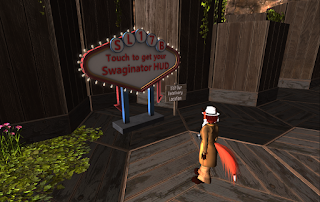 Like other Second Life Birthday celebrations in the past few years, this one has a gift hunt by Linden Lab. Called the "Swaginator," the objective here is to go from one destination after another, collecting the gifts, or "swag," along the way.

Wearing the HUD, you get a clue to where the first gift is, as well as a location to port to. Getting to the first spot, the Swaginator both won't be immediately in sight, but some distance away on another side of the structure next to you. The second one, the gift will be inside a place some distance away, but still on the island you're at. The third gift was the hardest for me to find, but eventually I did (it's not in a different sim). The ones afterward were easier to find.

There are a total of six gifts to grab in the SL17B Swaginator hunt. The gifts consist of three "floaties," including one that's really a raft, and three mole garden gnomes. There's no bonus for finding all six. Just the challenge of a little game, and a few items you're likely to find some use out of this simmer in Second Life.

Don't forget to check the SL17B grounds, notably the gift shop area, for some more gifts.

Posted by Bixyl Shuftan at 1:01 PM