An Arresting Experience for Relay for Life

I was going about in Second Life when all of a sudden a group IM appeared, from Vixie Valiant.

“Ok, I am back in jail on a charge of chicken rustling. Come and donate to the Relay for Life to release me in this jail and bail event! It's all in good fun for a great cause. $4500L wins me my freedom, so come help release the cute fox for a good cause!” This was followed by a SURL, to the Dry Gulch sim.

I thought to myself, What has that vain, crazy, vixen gotten herself in this time? Gotten herself arrested in some Wild West town by some country sheriff whom didn’t take kindly to strangers suspected of doing no good. And even in the Metaverse, some find foxfolk with their fluffy coats, pointed ears, and bushy tails pretty strange.

There was silence for a while, then Vixie sent another group message, “Since nobody wants me released, how about coming down, donating in my name, and laughing at me behind bars?” That was followed by comments, “Can I laugh at you from here?” “Vixie is in jail!” “(laughter) Poor Vixie.” The vixen answered, “No, it's a Relay for Life fundraiser, have to laugh at me in person. ... I think I've raised $1L to free me so far.” “Can we donate to keep you in jail?” “She committed a fowl crime, stealing chickens.” “I plead innocent.” 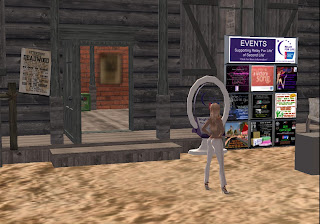 I ported over, into a sim that was at first a bit gray with lag, but as it faded, I found myself in the middle of the street with a definite Wild West look, Dry Gulch USA. But instead of cowboys, most everyone around looked more like city dudes dropping by as tourists. I soon looked around, and found the jail. Next to the door was a board advertising other Relay for Life events, and a RFL Kiosk.

I also found the following notecard:


The Sheriff is: Mountain String.

You may not post bond for yourself but can for each other or a friend. You can be rearrested if your friends feel you are a bad one to be set free!!

Re Arrest will cost the person requesting it : 1000L

There is no limit to the times you can be rearrested!!!!!!!

All fees for arrests and bails will be paid directly to the Relay for Life Kiosk located at the jail.

At close of event anyone remaining in jail will have to pay a fine before being released.

Any questions on arrest, bonds, or rearrest and fee will all be direct to : Mountain, Sweeter, or Leala 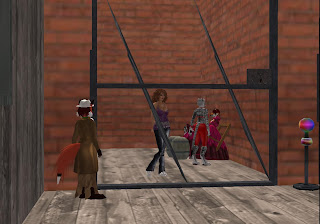 I walked inside, and there were a few cells. Vixie was in one of them with a couple other girls. She was dressed in a fancy red gown, sitting on a chair propped up against the wall, and not saying anything. One of the deputies had a tag over her that stated she was to be IMed after a donation was made telling whom it was for.

I soon had to leave, so never did learn how long Vixie was in the slammer. But as the card with the rules stated, “You can be rearrested if your friends feel you are a bad one to be set free,” considering the comments of the others in the group chat, I could easily imagine a collection made to collect the fee to toss the vain vixen back behind bars.

Vixie Valiant is a member of the Passionate Redheads, a Relay for Life team.