Changing one's voice in Second Life is not exactly new. I heard stories about software that when installed on your computer would change the inflection of one's voice, from male to female and vice-versa. Other equipment could do the job as well. One male DJ friend of mine once demonstrated this when he used a second computer to log-in an alt he sometimes used for a roleplay sim, and used his equipment to alter his voice that made the voice coming from the avatar closer to a girl's.

Now Linden Labs itself will be offering this service. Almost overlooked in the midst of the Linden Labs' layoffs, the 2.1 "Alpha" viewer has been released with the option of "Voice Morphing."


Voice Morphing is a feature that Residents have been asking for almost as long as we've had voice capabilities inworld. Simply put, it's the ability to change your avatar's voice to match any one of a number of tones and characteristics. Want to sound like a robot, a furry, or the opposite sex? With Voice Morphing, that ability is now just a few clicks away. The ability to change what your voice sounds like inworld will not only make it a richer and more interesting experience to be part of a community in Second Life, but will also help introduce voice to Residents who have been reluctant to use it in the past because they were uncomfortable making their real voice heard inworld. With Voice Morphing, you can be whoever you like in Second Life in voice as well as in appearance. As a first step, we're introducing 25 voices, available for purchase via subscription in five packs of five each, with the following themes: scary, feminine, masculine, tiny, and techie. You'll be able to sample each one for free to find the morphs that work best for you. 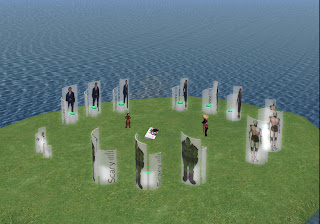 It will be interesting to see how much this development will affect Second Life. The posts on the official Linden blog suggest roleplaying uses for characters, as well as allow those too shy to use their own voice to use another. When mentioned in the Residents' Disscusion forum posts though, the first thing brought up was about those using voice to make sure they were picking up a girl for a fast date, and how paranoid they must be feeling now. Some thought this might be the end of many in SL acting like playboys. Some were more skeptical, saying some wouldn't be so easy to fool by voice morphing they've seen in the past.

For the Blog posts about Voice Morphing, click Here and Here.