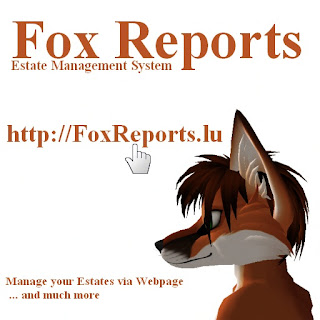 Fox Reports began as a monitoring system for SkyBeam Sandbox. It was used to be able to file notes and reports about various people who caused mischief or broke the rules with repeated infractions leading to land or estate banning as appropriate, with the ability for all of the sandbox 'guardians' to have access to each others' reports. The system has a number of features geared towards making this information easily accessible by all admins without having the installation or trust network issues incurred with something like banlink.

Even more exciting are the new features which allow for estate level controls from the web. For any estate manager or owner who has ever been at an event and had to leave to go ban someone or restart a laggy region, the ability to launch a web browser and handle the situation remotely is a huge blessing. It further enables one to react to situations when not even logged into Second Life, like when one is stuck at work, for example. This also gives you the ability to give additional managers the estate level controls, even if they aren't Estate Managers in game, thus extending your management team beyond the normal ten allotted.

Bixyl Shuftan: How did you find out about SL?

EriX Oh: (I saw it on) TV, and was jobless, for a short time. (I was interested in) the thing, that I can convert L$ to real money, which I did sometimes.

Bixyl Shuftan: How did your experience go at first?

EriX Oh: Because I'm programmer, I've had a completely different experience than the other users. It went fast. After a few days of SL, I found this sandbox (SkyBeam), later on, Charlene, etc.

Bixyl Shuftan: How long was it before you got a position here at Skybeam?

EriX Oh: I think only three weeks, and I had the guardian tag. ... I always made photos of griefers, proof ready, put these up to my server, and gave Char the links to the picture as IM.

Bixyl Shuftan: When did you first come up with the idea of Fox Reports? 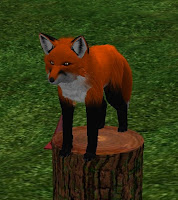 EriX Oh: I came to the idea when I saw, the issues between guardians, and the communications: what did he/she do , with that person, etc. I already saw the problems. So, I came to the idea to have a webpage, to manage that. It was only a simple textbox, with an person-index,nothing more.

Bixyl Shuftan: What kind of problems, for example?

EriX Oh: Communication: I mean, what did Guardian A do with that person X , is X already warned/banned, etc. So the entire "clique" will instantly update, and not need to ask around for the information, and solving the offline-unavailable issues of the person(s).

EriX Oh: And so, it evolved more and more. And then I got the idea to match the Second Life estate-ban list with my system. And so I re-made the system, to get and manage SL's banlist, and resolving other issues, such as mass ban/unban.

Bixyl Shuftan: How long did it take to develop the system?

EriX Oh: I only needed a few, four maybe, days to have the first primitive system up, since, I did already own the server. The system lasted only two months, and then I made what is now known as Fox Reports, April 2007 I think. Not yet public.

Bixyl Shuftan: So what are some of the features of Fox Reports?

EriX Oh: Main feature (as written on the main page), Report management and Estate-Management (off-world), with User-security rights, and E-Mail notifications. Estate includes full access to the estate's banlist, restarts, and messages. It mainly makes use of the (comfy) restart-sim functions, since they no longer need to TP to the actual sim to restart it.

Access via LSL works well. Thus, you're able to add a "Firealarm-button" to restart the sim, where the button is. Of course, check first who did pushed the button. Otherwise, anyone can restart the sim.

Bixyl Shuftan: So this fire alarm button, anyone can see in the sim, and press?

EriX Oh: If badly programmed, yes. I never saw something like that.

Bixyl Shuftan: I read there was a feature in which the system can be accessed if one is logged into Second Life, or not.

EriX Oh: The functions are all accessible, inworld and outworld, using a regular webbrowser. To restart a sim, for example, you do NOT need to be online in SL - as the bot will perform it, not you.

Bixyl Shuftan: How easy is it to put another sim manager into the system, such as a friend or friends who can be here when you can't?

EriX Oh: Easy, you simply create a Fox Reports account for the person, and tell the server, that the person can access these estates (permissions can be set on estate levels - if you've multiple estates, and different groups of people. who can do things). They do NOT need to be an EM here in world - thus, that allows to have more than 10 "pseudo-EMs.” That's a trick, that we do use here in the SkyBeam sandbox. They're not estate managers here, but can ban/un-ban people from the estate, and restart the sim in case of issues, causing many other people to go "huh????"

Bixyl Shuftan: Any other features in particular you wanted to bring up?

EriX Oh: A new feature will be added soon, a "sim grabber,” that fetches parcels for sale (you do not need to drop an object to the parcel) and allows you to list it on your page, using the API - but that needs to be developed first.

Bixyl Shuftan: Any other projects that you're working on besides Fox Reports?

EriX Oh: I'm trying a new app, but dunno if that works, etc. It has nothing to do with SL. I've some small applications available to download (they can be found at Fox Report's too).

Bixyl Shuftan: Sounds Good. Anything else you want to add?

EriX Oh: Not that I know of, except that I need a few more clients.

EriX had a little time before he had to leave, so he showed me his grounds at the appropriately-named Fox sim. It had some interesting features, such as an obstacle course, and a building with pictures of foxes, and old Luxembourgian money from the country's pre-Euro days on the floor.

Find out more about Fox Reports at the website: http://foxreports.lu/