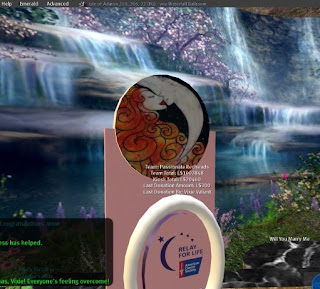 On Thursday June 10, the Relay for Life group Passionate Redheads announced their success in reaching their one million Linden mark in their fundraising.

Many of the group were at a party in Ashira's Enchanting Ballroom at the Isle of Adaron, the party starting at 5 PM SL time. It was 5:52 PM when Sabine McGettigan announced, "We just went over L$1 Million!!! Go Redheads!!!"

"We have all worked very hard for this." Daaneth Kivioq, whom provided the picture, would later say, "Thank you."
Posted by Bixyl Shuftan at 12:01 AM