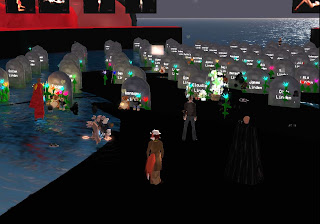 At the Rouge Lounge and Boutique nightclub, the owner CodeBastard Redgrave set up a graveyard with rows of headstones as a tribute to the Linden staff whom were laid off in the “Reorganization” announced on June 9th. Porting in to the place, it was gray with lag, and half over water. The gray took some time to fade as people were continuing to port in to pay their respects, including a few Lindens. Blue, Teagan, and Mia Linden’s stones were particularly full of tributes.

Being thanked by one visitor, Code commented, “It’s only normal. I didn’t know what else to do.” After building the memorial, residents had been porting in, and leaving flowers, bears, and other items in tribute. When asked about the turnout, Code told that it had taken her by surprise, “it’s been capped all of the last 24 (hours). I had to lower the avatar count to make it less laggy, but it’s been from 40-80 people non-stop. ... I have no idea how many people circulated around here ... since my visitor counter busted over memory usage.” 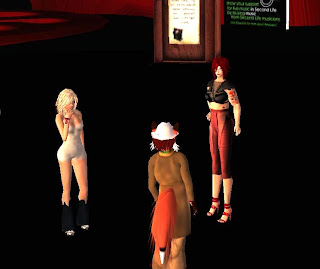 “I didn’t plan anything, to be honest, but I am on the lookout for a place that could host it better than here, a more permanent one. ... I just wanted to pay my respects to them, for serving us for so long and being so patient with us. I'm just so in awe of the response.”

People continuing to drop in asked about leaving flowers, finding they no longer could. Code explained she had disabled that option, but left at least one flower in front of every stone. She had also made headstones for a few Lindens let go before the purge yesterday out of requests by visitors, such as Pathfinder. 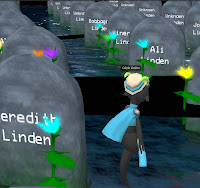 A number of Lindens dropped by, including Zen, Aimee, Cayle, Fisher, Kona, and Coyote. Most spoke nothing. Some greeted the others hello. Only Kona spoke with any degree of boisterousness, “lol ... wow.” Other visitors expressed their sadness for those let go, occasionally one asking one of the visiting Lindens how could they let this happen. Coyote Linden remarked that he couldn’t say anything not in the press release, “Now please let me be,” and he walked to the memorial to contemplate what happened to his peers.

The graveyard is at the Rouge sim at (152, 51, 21). Code plans to house the memorial until a more appropriate place is found.

“Thank you CodeB for giving us all this chance to show the Lindens how much we appreciate them.”