Some Events and Exhibits in SL7B

It’s been a busy week for a certain roving reporter, and haven’t been able to write as much on Second Life’s Seventh Birthday as I planned, between the Greenies, Philip Linden and other things. But I have seen some of the goings on there. 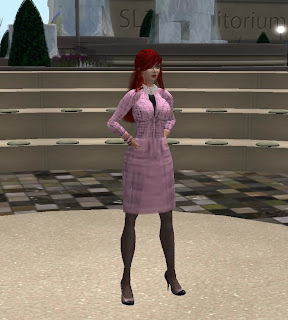 “This is becoming nighttime entertainment, luring people away from television.” She felt the Internet was poised to make further inroads into traditional media in both it’s audience and it’s advertising revenue, citing a prediction advertisers would be spending 100 billion online by 2015. Internet ads also had a “superior viewer recall” than those on television, “fifty percent compared to twenty-eight percent.”

Machinima, she felt was more than just a recording, “We live inside this immersive place. ... (Here), you can talk to people around the world, or just down the street.” Pooky felt even though others regarded Second Life and virtual worlds in general dismissively, “this is the future of ‘television’ so interactive,’ they’ll have to invent a whole new word for it.”

at 6PM SL time, the LaurenLive comedy act was on stage, with comedian Lauren Weyland on stage. I say comedian and not comedienne, as the voice coming from the feminine tatooed avatar was clearly male. Lauren proceeded to make light of Second Life’s recent troubles, “Rumor has it the only Linden left is Torley and his alts.” (S)he also poked fun at other issues, pointing out one set of 2006 statistics of people in Second Life, “eleven percent, male in real life female in Second Life, female in real life and male in Second Life one point six percent, male in first life both in Second Life four point eight percent, and then there was one, four percent said ‘other.’ And I didn’t know what ‘other’ meant. (laughter) What is ‘other?’ “ I had been told Lauren would be taking a break from her comedy routine after this night until August. 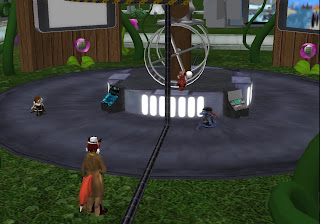 Following LaurenLive, I walked around a little. I saw a few exhibits. The one that was occupied by it’s sponsors was the Raglan Shire one, with a couple of the tinines running on exercise wheels. A third bid me hello, “Greetings biggie,” and told me they were running to provide power to the sim, “if they stop running, you get lag.” I asked what would happen if one took a break. “Then the other gets mad and stops. Once a biggie tried running.” He told me the larger runner got stuck in there. He did say that tasty treats did keep the tiny runners going. 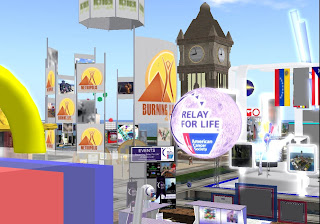 Tuesday the 22nd at 6PM was Jaycat & Frogg at the SL7B Auditorium. After listening to them, I looked around more exhibits. I found a Korean booth, which apparently had a dance act earlier in the day. But the dance animations were still there, along with a stringed instrument called a Geomungo. I went to Bear Island, and found a few freebies among the bears. There was also a statue of the recently laid off Blue Linden. I also found a Greek Gyros eatery, and some amusement part rides. I also came across the Second Life Coast Guard, and had a talk with one of the Master Chiefs. And there were many more.

With a lot to see, and so little time to see it, there was still I lot I have yet to see, let alone write about it. Sunday the 27th is the last day of events of the SL7B. Click Here for the SURL for the Auditorium.