Dana wanted Second Life Newspaper not to end with a simple and sad goodbye article, but with a party as a tribute to our time and work together, "let's end this with a bang." And so she did. 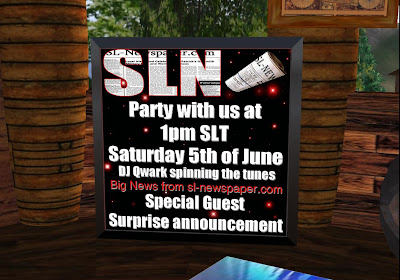 She wanted to keep things quiet, and after telling us her plans, we agreed to do so. I told some friends there would be a "major announcement about the future of the paper," but that was all. The day of the party, the signs in the first illustration with landmarks inside were passed out to everyone in the SL Newspaper groups. No real clue about who the "special guest" was, or what the announcement was. 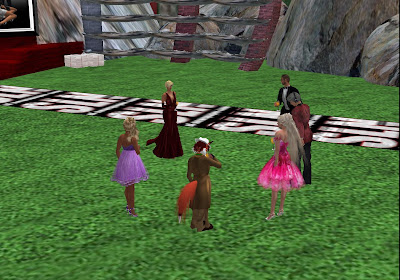 The special guest was in fact JamesT Juno, ending his hiatus just for today. Just before the start of the party at 1 PM, several of us were already at the site of the party in one of the Skybeam sims, James, DJ Quark, Gemma, myself, Breezes, and Dana. A few glasses of virtual champagne were passed around and raised in a toast. 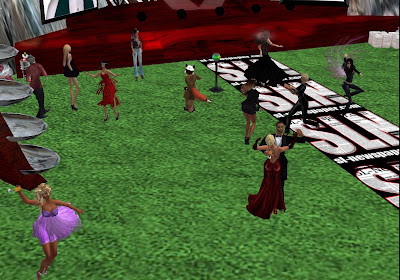 And at 1 PM, the party started out well, people I hadn't seen in a long time coming in, along with some sponsors such as 10 Goosson of M&M, Tygeria Mirabeau and Amythe Midnight of Mystery dropping in. Others who made the paper, such as Kat2Kit of Pookymedia and DJ Nydia Tungsten of the Relay for Life "Passionate Redheads" also came by. So did madddyyy Schnook, noted for his publishing of "How to Get a Second Life" in real life. 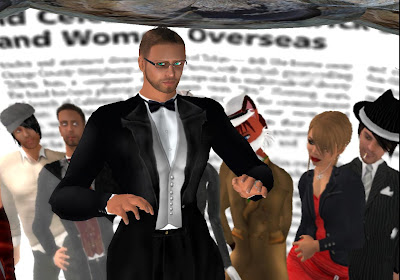 In the middle of the party, James and Dana got on stage, in front of an old picture of the crew done about a couple years ago. Dana called out, "Ladies and gentlemen, can I have your attention please?! ... Please move into chat range. Tonight is a very special night. And I would like to welcome our special guest, James, back to SL purely for tonight." James bowed, and was greeted with much clapping and applause.

In the audience were a few tears and sad sighs, "So sad." "Oww James, that's bad." 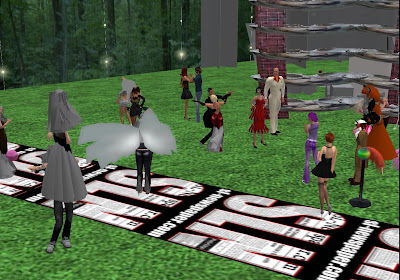 "I want to thank the many many people who stood with us over the long time we had our newspaper. Everyone, thank you."

"But most of all I want to thank Dana Vanmoer for making it all possible in the end."

"But instead of doing a long speech, many know I am not a man of a lot of words anyway, the only thing i want to say is: "

"On behalf of Dana and me, we salute you all." 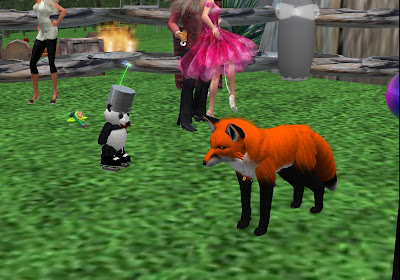 "Now lets DANCE for the last time with SLN."

The audience applauded, madddyyy Schnook saying, "Thank you for the support and news. and everything you have done." Venus Jervil added, "Sorry to hear this, and thank you for everything you brought to SL life with this excellent newspaper." 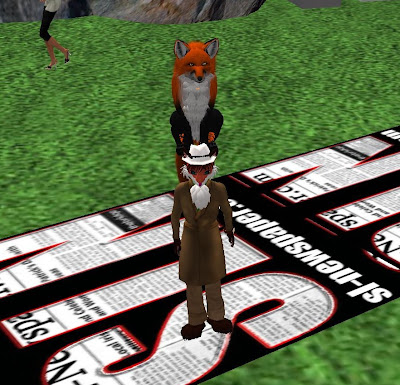 And the dance continued. People chatted about old times, and talked about plans. Yours truly had to spend some time answering questions over IM chat. The large numbers of residents at the party caused many to crash, and there was the lag. But a good time was had by all. And at a couple points, Erix Oh, noted for his Fox Reports Security system, leaped up on my head with his feral fox like a monkey on a human as I was occupied in a few IMs answering qestions. 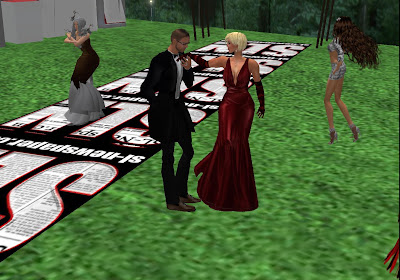 We hope it's not the end, but an indefinite hiatus.