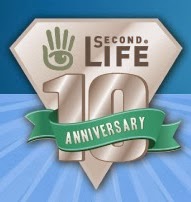 2013 is almost over, and as people get ready for the New Year, we look back on the old one. Linden Lab is no exception, talking about their accomplishments in their "A Look Back at Second Life's Tenth Year" post on their official blog. First and foremost, their tenth anniversary.


This year, we marked Second Life’s tenth anniversary with inworld celebrations, special events, an infographic of some fun factoids and stats, and gave away thousands of festive free gifts and special-edition avatars. We hope all of you who joined us in the celebrations had as much fun as we did!

The boundless creativity of Second Life users that fills the virtual world showed no signs of slowing this year. The Marketplace remained busy, merchants gained new advertising opportunities, and creators submitted more than 3,000 new entries to the Destination Guide. If you follow this blog closely, you’ll note that we also began periodically highlighting some of the new and interesting entries here as well.

Linden Lab also talked about their updates to Second Life and it's viewer, such as "Project Sunshine" which promised a better virtual experience for users. However, it declined to mention those with older computers often found going about inworld slower and buggier. Also absent were the two Terms of Service controversies, and other mishaps. It's not often corporations talk about when things go badly.

Second Life Newser will have it's Year in Review in a few days.
Posted by Bixyl Shuftan at 6:00 AM