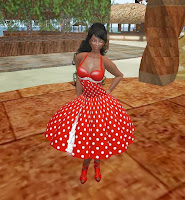 Just a few days after it helped organize a discussion about InWorldz, members of the InWorldz/Second Life Connection Center group got a surprise. Without warning, the group's owner, Amore Crux, announced the place was closing. Manager Zia Larnia was just as surprised as anyone else to hear the news, and today made a statement about what had happened.

Read Zia's statement in Other Grids and MMOs.
Posted by Bixyl Shuftan at 4:30 PM