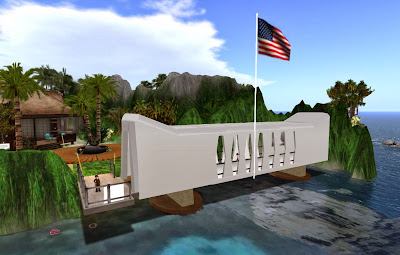 It was 72 years ago this day in which the Imperial Japanese Navy launched a devastating air attack on the US base at Pearl Harbor . A number of ships were sunk or damaged, including three battleships that were sent to the bottom, and over 2400 American servicemen lost their lives. About half the casualties came from the USS Arizona, which was sunk along with almost 1200 sailors whom were killed. The other battleships were eventually brought back into service, but the Arizona was left on the bottom as a memorial to its crew. Later on, an official public memorial was built over the ship. 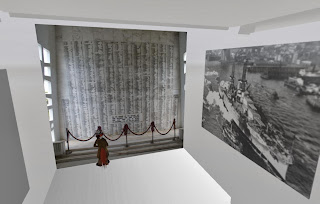 Second Life has it's own USS Arizona Memorial, in the Oahu sim. Most of the island is a happy tropical residential place, but one corner was set aside for a replica of the memorial to the sailors whom met their end at America's entry into WW2. A lei thrower allows visitors to toss in rings of flowers for the fallen. Under the memorial is an image of the sunken battleship, complete with an occasional bubble of oil that makes its way to the surface from the wreck. inside the memorial are pictures of the real structure, plus of the USS Arizona. At the end is a plaque to those who gave their lives in defense of the United States that day.