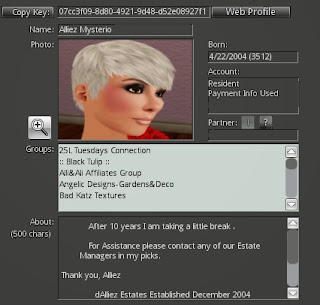 Last night on the evening of Dec 3, it was announced in the Relay for Life Voulenteers Group that Alliez Mysterio, a longtime Second Life resident and a member of it's Relay for Life and the "Relay Rockers" group had passed away.

It is with deep sadness and sense of loss that i share with all of you the passing of Alliez Mysterio to Breast Cancer.

Alliez was the owner of dAlliez Estates and one of the creators of the 'Estate System' in Second Life. Her first sim Rue dAlliez was opened in Dec 2004 and was the home of T1Radio and the Relay Rockers team until 2011.

Alliez was a founding member of the Relay Rockers and sponsored and supported the team and Relay For Life in Second Life since its inaugural event in 2005.

Losing Alliez is a loss not just to those of us who knew and loved her, but to all of Second Life.

Please join Nuala and I in extending sincere condolences to Sue Peregrine, her daughter, and to her families in both worlds. We will miss our dear friend very much.

This year's Holidays Of Hope Ball will be held in Alliez' honor, and the 2014 Relay Rockers will be dedicating our 10th season in honor of one of our founding members.
Posted by Bixyl Shuftan at 6:01 AM