The Avi Choice Awards, which brands itself as "the premier annual awards presentation recognizing the people and talent" will be taking place on Sunday Dec 15th at 3PM SL time. 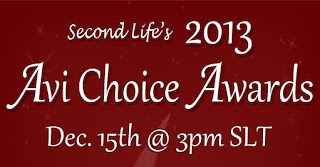 The Avi Choice Awards is the premier annual awards presentation recognizing the people and talent of SL’s™ amazing creations, completely chosen and voted on by SL™ residents.  The 2011 and 2012 Avi Choice Awards response was tremendous and the websites saw an amazing 65000 visits and an staggering number of votes.  This year we expect even more.

This years show will again be hosted by T1 Radio’s Trader Whiplash and Nuala Maracas.  Presenting Avi Choices this year will be Saffia Widdershins and Elrik Merlin of TREET TV’s Designing Worlds and Satin Galli and Erin68 Frog who are longtime SL performers and RL couple, too.  Both sets of presenters are nominees this year and have both won awards in past years.  Performances at this years extravaganza include the wonderful artistry of Particle Tom and Lexi, Therese Nightfire and the Guerilla Burlesque Dancers and first life band Wayne Davis Rocks.  The show will be another stunning example of the talent and brilliance available in our wonderful SL grid.

The award presentation will take place at the Christmas Expo, and is considered a "black tie" formal attire event.

Those with questions are asked to email: AviChoiceAwards@gmail.com.