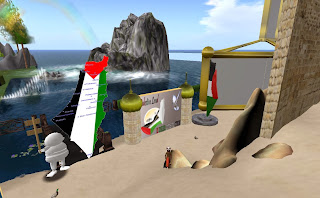 In November last year, Second Life Newser reported on the Jordan River sim (article), of which the owners had built an area to support the cause of Palestinian terrorist groups whose goal it was to topple and overthrow the state of Israel. Taking a look back there recently, the Arabic scripts and black, red, & white flags were gone. The sim was now in someone else's hands for whatever other means they wanted, and all of the propaganda gone.

It is unclear exactly when in the previous year the old owners lost the sim, and why. Perhaps Linden Lab finally decided to put their foot down about residents actively calling out for the end of a democratic country, and it's people (which include Muslim and Christian Arabs among it's citizens and government, in addition to the descendants of Jewish people from Europe whom had returned to the place of their ancestral orgin). Or perhaps it was closed from the owners not being able to pay their teir. Or maybe it's builders closed it on their own, deciding there was a better use for their time and money.

Whatever the reason, while the end of a sim is usually a sad occasion, this time most residents are more likely to take the news with relief.