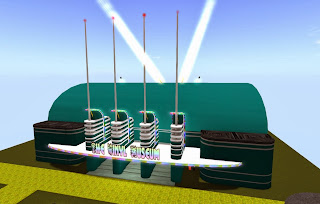 On Monday December 2 at 8PM SL time, a club in the HV Community sim became active once again. Perri Prinz, a sci-fi writer and a popular DJ was reopening her club. It was now known as "The Vinyl Museum," a reference to Perri specializing in 60s and 70s music.

The Green Meadow Lands ballroom has morphed into The Vinyl Museum, and is now beginning its first event.  Come on up and enjoy some happy vinyl era music played by vinyl era bunnies.  And if they get enough listeners the bunnies might even throw some money around.  The theme is do your own thing or come as you are.  We don’t care what you wear, as long as you look good. The prize is 200 L for every 5 listeners we see on the DJ board. 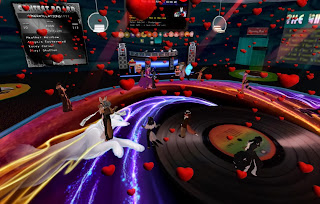 I had talked to Perri earlier. She was confident she could now keep the club up and running on a regular basis. With few others having events at 8PM, she decided to play at that time slot and keep at it to build an audience over time. She would also have some help, HollyAnn Lapina (Lacy Carver). On nights that Perri would be unable to play, HollyAnn would perform in her place. Also, there would be no themes. Every night would be a "come as you are" with all visitors eligible to win as long as they were dressed decently.

The crowd of the grand opening was somewhat small, a little more than a dozen. But a happy time was had by all. More cash was added to the board and the 200L became 2000L. At the end of the party, it was announced that the votes were evenly divided among four winners. 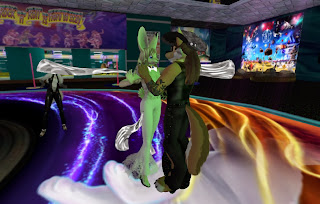 The club has been around for quite a well. It was originally called Club Xanadu, but with other Xanadu style clubs around, people called it "Perri's Xanadu." The name would persist even when the club was renamed the Green Meadows Club.

Set on a platform high over HV Community, the club is based on the Pan Pacific Auditorium, which was the building used in the movie Xanadu. The interior is dominated by a discotech dance floor. Having the look of a disco club from the past, the place has a number of posters and album covers up. The stacks of vinyl records