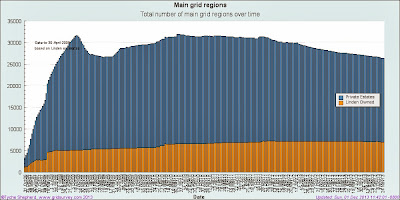 For some time, the total amount of privately held land in Second Life has been in a slow decline, and the most recent statistics from The Second Life Grid Survey show the trend continuing.

The latest numbers show the number of private sims to be 26,403. In the SL Universe forums, Tyche Shepherd stated this was a loss of 1568 since the start of the year, or 7.5%. While not as big a decline as last year's 2500, it's still not good news. Daniel Voyager estimated at this rate, the total would drop to about 24,000 in a year.

Hamlet Au had two things to say about this development. One was that the declining tier revenue was being partially made up by Blocksworld and other aps owned by Linden Lab outside Second Life. Should tier continue to fall, the Lab will depend more on it as a source of revenue. The second was a reminder to readers not to expect tier rates to fall, and that was no solution to Second Life's shrinking land area. If for no other reason most virtual property was in the hands of a handful of land barons, whom are doing fairly well. A drop in tier, Hamlet felt, would just mean a severe drop in revenue from Second Life. To stop Second Life from shrinking, Hamlet argued, the Lab needs to find a way for it to attract more new users. Hamlet got a number of suggestions from readers about how the lab could, though they were skeptical about the Lab's willingness, and competence to do so.


So can Second Life turn around, or will the slow shrinkage continue?