Tribute to Nelson Mandela at the Sunrise Museum. 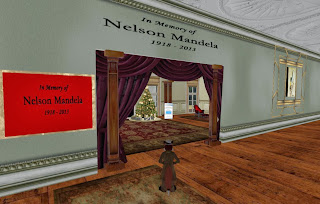 On December 5, Nelson Mandela, South Africa's most noted civil-rights leader whom eventually rose to become the country's president, died at the age of 95. Following the announcement of his passing, he was honored with tributes across the world. This included here in Second Life, at the Sunrise Mansion Gallery and Museum. 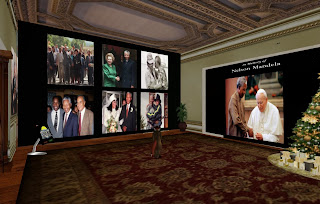 Sunrise Museum [SRM] honors human rights advocate and freedom fighter  Nelson Mandela in our presentation gallery with an exhibit and short film. Drop in and receive his life in pictures slide show free.


The exhibit itself is in the back of the building. There were several photographs of the African leader, most of them in his later years following his release from prison. There was also a slide show of pictures. One could also pick up a copy of the latter for themselves.