Discussion About InWorldz At Purrfection 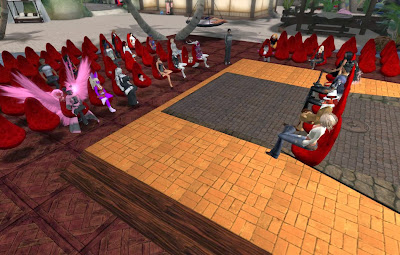 On November 30th, a discussion about the InWorldz Grid took place at the Purrfection sim, hosted by Nydia Tungsten. Over thirty people attended the meeting. This included Zia Larina and Amore Crux of the Second Life/InWorldz Connection Center, and Elina Llewellyn, whom Zia called one of InWorldz' founders. A number of questions were asked, and answered. Probably the most important concern answered was that no one has to chose just one Grid. Setting up shop in InWorldz does not mean leaving Second Life behind, and in fact many InWorldz residents still spent time in the larger Grid.

The meeting went on much longer than expected, a few hours. Due to the business of the weekend, an in-depth report will have to wait until later this week. But in the meantime, people can watch the following video: http://www.twitch.tv/nydia_tungsten/b/484003456. The meeting starts at about 1 hour and 23 minutes into the recording.

Second Life Newser apologizes for the delay.
Posted by Bixyl Shuftan at 6:01 AM