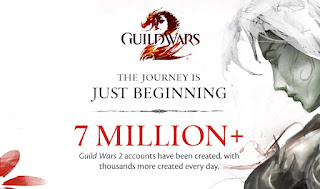 For more than twelve years, the genre of Massive Multiplayer Online Role-Playing Games was dominated by "World of Warcraft." But lately it's been crashing in numbers. And something happened recently that put it's status as the champion of MMOs in doubt.

Since shooting up from 6.8 million subscribers to 10 million in November 2014, World of Warcraft's numbers have plummeted, down to 5.6 million in August with no sign of slowing down. And while the MMO that once was *the* game in its genre has been shrinking in numbers, others have been growing. One, Guild Wars 2, recently announced it had reached 7 million accounts, up from 5 million in August. The growth is attributed in part to it's new expansion "Heart of Thorns."

So it looks like World Of Warcraft is still the Champion MMO, at least for now. That it was in doubt is a reminder with it's dropping numbers, the best known of MMOs just doesn't have the draw it used to. While this isn't the end of it's days as the champion, it seems just a matter of time.