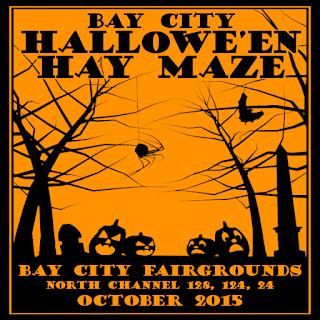 BAY CITY, SL (12th October, 2015) - Bay City is hosting its fifth annual Hallowe'en Hay Maze in the Bay City Fairgrounds in the North Channel Region. The space will welcome people from all over the grid to explore a traditional autumn hay maze filled with critters and spooky effects.

The Hay Maze was built by Marianne McCann, with landscaping by Pygar Bu and assistance from Kriss Lehmann of Botanical and the Linden Department of Public works, Enjoy a fun, spooky trek through the maze, and avoid the ghosts, rats, and giant spiders along the way!

After completing the maze, Bay City also welcome you to check out a couple of our permanent locations with a scary flair: the Channel Island Asylum and the Falmouth Hotel. You'll find signs pointing the way after you exit the maze.

For more information, or to participate in the event, please contact Marianne McCann.