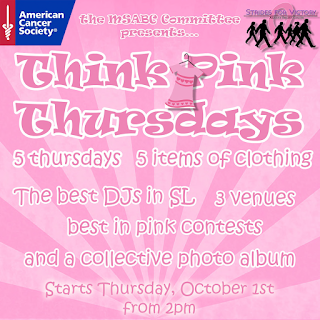 To promote the awareness of breast cancer throughout Second Life, we are encouraging all users to proudly show a piece of pink clothing on their avatars, starting October 1st! Each week will have a different piece of clothing to be featured as pink. You can make your own pink clothing, or you can purchase from the Vendors at ACS Island! http://maps.secondlife.com/secondlife/American%20Cancer%20Society/199/63/26

For three of the Thursdays the Committee will present an event with a DJ and a Contest of BEST IN PINK! The other two Thursdays, send Rowena Dubrovna a picture of you and your friends (full perm)  in pink! At the end of the season, a photo album and slide show will be presented!! Join us today!!

We encourage you to host your own events at venues on the two non Committee Thursdays- flaunt that pink!