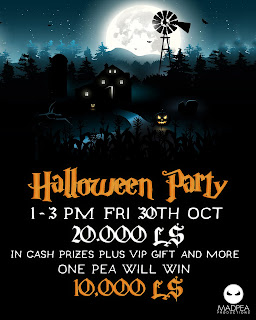 The Madpea group recently announced they had a total of ten thousand members in their group. It's a fairly active one as one doesn't have to wait long usually for chatter and conversation. To mark the occasion, their Halloween Party is also being called the "Ten Thousand Pea Party," with 20,000 Lindens in prizes given out, and one lucky member of the group to receive 10,000 Lindens.

The epic Halloween party will start at 1pm slt at the Peatonville Asylum with music from our very own DJ Kess Crystal. All our vips will receive a special 10,000 PEA GROUP GIFT, plus we will randomly throw money at you! The amounts will be random as will the winners be and in total we’ll be giving away 20,000L$!!!!  Costumes aren’t necessary but it’s Halloween so if you can dress up and come party with the Peas and MadPea Crew. It’s our way of saying we LOVE you Peas! Thank you for making MadPea the number 1 game community in Second Life!