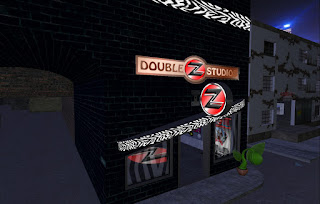 For the second time in a little more than a year, ZZ Studios, whose owner Cindy "Zig Zag" Babii we interviewed in 2011, has once again moved. In October 2011, the adult media outlet and club moved to the Static Nightclub sim, which would soon be renamed after the venue. It would stay there for three years until moving in August 2014. And now once again, they've relocated to a city block in the Sheridan sim

Well, we had to move and rebuild...and are still rebuilding, but...Club is open and office is open and soon wifi cafe and other things!  So those of you wanting the new location...   HERE!  Now get down here and hang out, enjoy!

For October, the venue plans "Terror Tuesdays" and have plans for a car show around Halloween.