Burn2 And Other Events In Review 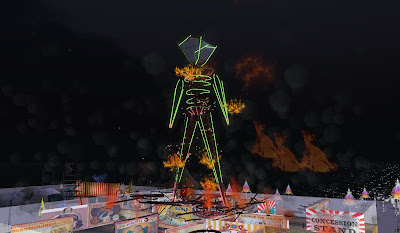 This weekend saw the high points of the Burn2 art and music festival, the "Burning of The Man" and the Temple Burn. But these were not the only happenings going on. "How BraZaar" of the "Making Strides" Breast Cancer fundraiser had it's last two days. The Caledon steampunk community had it's Harvest Festival. Raglan Shire had musicians performing at their "Shocktober." The Roman community had its monthly festival with a Halloween twist. There was the "Homes For Our Troops" charity event at Veterans Isle. And other happenings we couldn't be there to see.

We'll have more details later. But for now is the time to rest up and real-life work. We'll have more on Burn2, and hopefully more, later.
Posted by Bixyl Shuftan at 6:05 AM