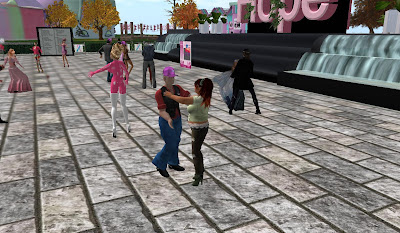 On Saturday October 17 the "How BraZaar" event, part of the "Making Strides" breast cancer fundraising season, began, offering music and shopping, the sales of the later and the kiosk donations of the former going to fund breast cancer research. On Sunday October 18 at 5PM, Trader Whiplash took to the stage at the Strides 2 sim with his "Time Machine."

Travel With T1Radio's Trader Whiplash back to The 60s! The Decade that changed the Face of Music.. Come On!  You Know The Words! Sing Along and Dance to the All The Hits! Don't Miss the *Time Machine Countdown* Spotlighting the TOP TEN Songs on this date in 1967

There were numerous pink gowns and a few pinkish tuxedos, as well as DJ Madonna's  pink rubber suit and one pink Gorean freewoman, out on the dance floor. But what brought the proverbial house down was when Fuzzball Ortega showed up, "Oh, pink. Hang on." 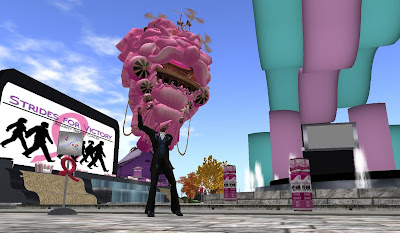 He was sporting his famous "The Hair." but with a twist, "Okay, pink." "It's 'The Hair!' " "Ohh noooooo! It is the PINK HAIR!" Trader Whiplash at the end of one tune, responded by putting on a certain song, of which the title escapes this reporter, but remembers the line "stranger and stranger." Fuzzball quipped, "Hey, you played that on purpose!" The response was laughter, "Anyone strange around?" "Is Fuzz wearing 'The Hair?'" "Yes, and it's PINK!" "The Hair is Hair-larious! (giggles)" 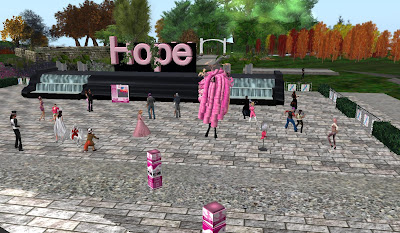 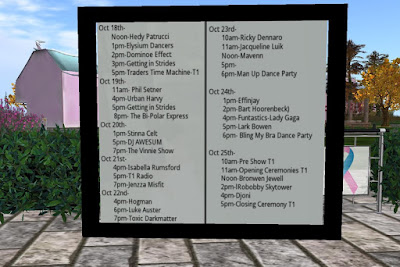 "How BraZaar" goes on to Sunday October 25th. Tomorrow, Stinna Celt plays at 1PM, DJ Awesum at 5PM, and at 7PM is "The Vinnie Show." Later in the week, Jaycat and Frogg will play at 1PM on Saturday October 24.

*Addition* After more web searching, I finally found the song: "People are Strange."