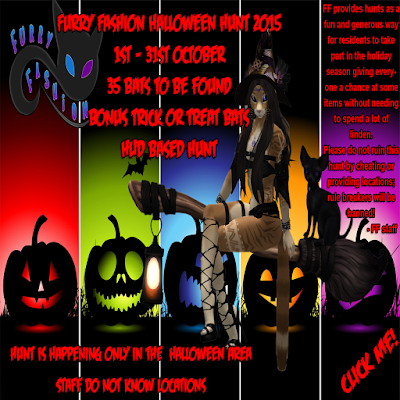 It's October, and that means for the Furry Fashion store, it's time for their Halloween Hunt. Running from October 1st last week until Halloween night, the event promises a new place to explore, freebies to pick up, and spooky Halloween-ish fun. 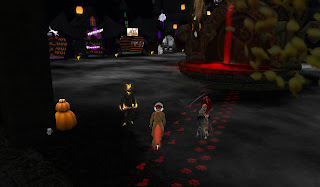 "We've been working on this all summer," Amethyst Crystal (Amethysia) told me about the event, "Basically theres a hunt in a special Halloween area, you get a hud as you go in and put it on and look for bats. the bats give out prizes as you find them and if you find them all you get a bonus gift box. there's also 'trick or treat' bats which will trick you but also give the chance to give a exclusive limited edition item too. There's also special halloween shops set up by various merchants." 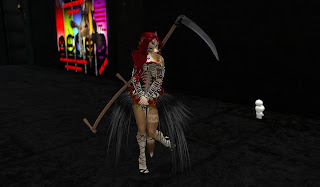 Amethyst and her friend Fortunas Sands gave me an early peek at the Halloween area. "Theres a maze and graveyard, witch's house and petshop, along with a surprise or two," Amethyst told me, "And there's plenty of seats around the area for good pictures, including a deadman's hanging tree. ... This is all going on along side the Quest Fur Cover grid wide hunt Furry Fashion organizes .... So a very busy month especially since we're in the Twisted Hunt too."

"Ae plan to have security working shifts here in costume for the first few days," Amethyst explained, then mentioned there would soon be special costumes for the staff. Showing me hers, it certainly left a lot around her mid-section exposed. When we got to a certain hall area, Fortunas would show me his ghost T-Res avatar, then a "Clownasuarus Rez" look, a T-Rex dressed up in clown make-up. 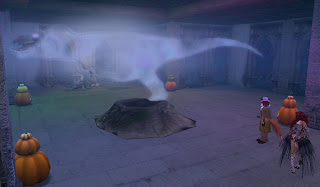 Of the graveyard area, "we even have staff graves," Amethyst told me. They plan to have their big Halloween party there as well.

As for the Halloween hunt, after picking up a special HUD for the event, one searches for the small bats scattered across the Halloween areas. Clicking on them, there is a chance the player may end up "tricked" and transformed, "Patrons get to become part of the horror show. ... They're trick or treat bats for a reason. But there is a chance of getting a exclusive gift off them too, a limited ed that won't be sold or given away any other time. And if you do get 'tricked' by a trick or treat bat there is a un-deformer door in the main  vendor area."

Once again, the event runs the whole month to Halloween night. So come on over to Furry Fashion sim for some spook-tacular Halloween fun.