Cartoon of the Day: Say That Three Times Fast 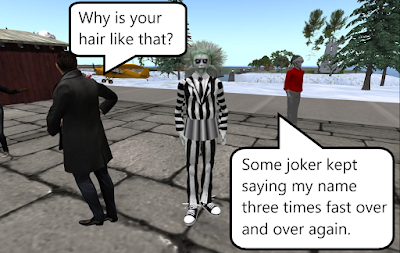 Taken at Bay City. For those who don't know, "Beetlejuice" was a comedy in which the named character is an obnoxious and untrustworthy "bio-exorcist" that offers to help a recently deceased couple scare off the couple whom recently bought their house, but isn't as helpful as he appears. To summon him, or get rid of him, one has to say his name three times. He can try to stop someone sending him back if he's prepared. But if prevented from doing so and there's no limit to how soon he can be summoned and unsommoned, someone could potentially make him go through a rough ride for a while.