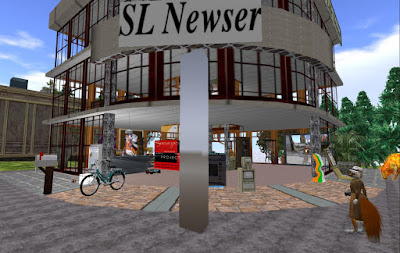 People keeping up with real-life news probably heard about the monolith found in the Utah desert. With no clue whom left it, theories about it's origin varied from alien visitors to artistic statement to prank. It was up for a few days, being an interesting diversion from stories of politics and the Pandemic, then was found to have seemingly vanished without a trace. Similar monoliths appeared in Romania and California. Then two men came forward, saying they took it down. The reason: environmental preservation. People had been coming in from all directions to see it, leaving behind trash and bodily waste, in addition to tire tracks.

As it turns out, at least one monolith appeared here in Second Life. Of all places, it was right in front of the Newser office in HV Community. It was a reader whom prefers to remain anonymous whom notified us of what had happened. So how did it get there and who was behind it? That is to be determined.