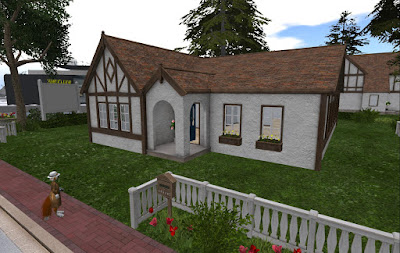 Friday December 4 was the start of the Christmas Expo. It was also the revealing of the latest style of Linden Homes: Chalets. This kind of house has it's origins in the Alpine

These white houses have some stained wood bracing on some walls on the outside. There's four styles of these Linden homes. The Reizend is a wide one story house. The Edelweiss is a two story dwelling. So is the Alpenrose. The Matterhorn is a two story style with a low roof that extends down to over where the walls would be. All have special touches such as flowerboxes with tulips by some windows.

It's unclear when these will be available. There's some land under development northeast of eastern Bellisseria (more on that later), but these sims are probably for the beach houses that were revealed in June. So these homes probably won't be an option until well into 2021.

To see the Linden Homes, head to the Happy Christmahaunakwanzika sim. But don't forget to check out the rest of the Christmas Expo.