Veterans Isle Fundraiser Gets Over 100,000 Lindens 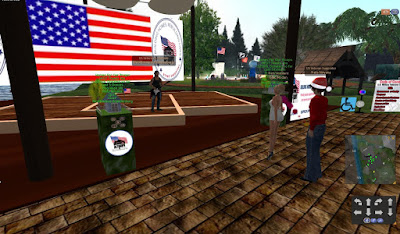 On Sunday December 20, Veterans Isle was the scene for their monthly concert. The event with several live musicians and one DJ, organized in part by guitarist Frets Nirvana, was to raise money for the Homes For Our Troops charity. It ran from 4PM to 9PM SL time, with people donating money to two

T’is the night folks …of our last benefit for Homes For Our Troops.  Come on out and get i  the real spirit of giving for our extremely injured veterans.  We have a great lineup for theis grand finale.  Check this out!

DJ Waya Snowpaw started things off at 4 PM. At 5PM, the live performances started with Ambrosia. At 8PM, it was Toxie Darkmatter's turn. Erika Ordinary took to the stage at 7PM. And finally Neomaximus Brandenburg finished things off at 8 PM.

Normally Veterans Isle has these monthly events on the last Sunday at the month. But with Christmas weekend, December is an exception.