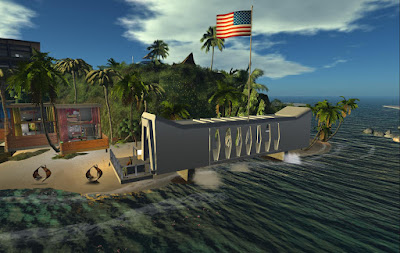 Today, December 7, is the 79th anniversary of when a task force from the Japanese Empire launched a surprise attack on the US Navy base at Pearl Harbor Honolulu Hawaii. Over 2400 Americans were killed in the assault. About half were from the USS Arizona, which suffered a catastrophic explosion when an armor-piercing bomb detonated a magazine, killing 1200 of the 1500 crew. It and three other battleships were sunk, the other four battleships and nine other ships damaged. The other three battleships would be raised. But the Arizona was left as a memorial to it's crew. In 1962, the official USS Arizona Memorial would be built above the ship.

In Second Life, there's a virtual USS Arizona Memorial, located in the Oahu sim. Inside are photographs and other pictures of the ship, and the names of the fallen are read one by one, in addition to people being able to toss leis into the water. The location was the site of events in the past, such as the 70th Anniversary commemoration.  It's unknown if any are planned today. But the memorial is open for people to stop by and reflect.