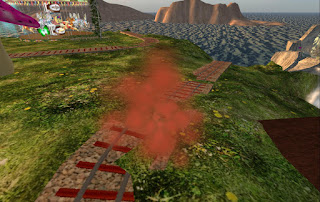 Despite that all the sims have been moved to the Amazon Cloud Servers, there's been no shortage of glitches on the grid. From longer avatar load times, to delayed teleports, to the map not showing landscapes at times, and more. There's been some minor grumblings from some residents (including a rumor or two). As for the Lindens and Moles, they've gone about fixing things the best they can. But it looks like the irritation of the residents hasn't gone unheard as there's been a display of some self-depreciating humor. On Thursday November 26, their Grid Status Report announced they were dealing with a problem causing people to stay clouded. 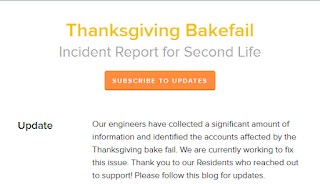 Our engineers are currently investigating an issue where some Residents may be unable to change outfits, always appearing as a cloud regardless of the outfit they put on. We have identified a potential cause of the problem and are working on reproducing and fixing the issue.

The title of the report was "Thanksgiving Bake Fail."

It wasn't until December 2 that Linden Lab announced they were well on their way to solving the issue. Other issues are still continuing to happen. But there hasn't been an opportunity for the Lab to show it's humor since, at least not on the Grid Status Report.