There's been much going on in the Confederation of Democratic Simulators. Probably the most important is the by-election going on. On Tuesday December 1, Delia Lake announced the details.

Have you thought about joining the CDS Government? If so, now may be your time for the RA!
During the regular autumn election period, three people declared their candidacy for the 5 seats on the Representative Assembly (RA). As specified by our CDS Constitution and Laws, we are holding a by-election in order to fill the remaining 2 seats.

December 1 was the call for citizens of the CDS to declare their intention to run for one of the two RA seats. They have until Monday December 7 to do so. Any campaigning is to be done from then to December 11. Polls open on Saturday December 12, and close six days later on Friday December 18.

As for the new Chancellor Samara Barzane, whom was elected in the normal election last month, her Inagural Ball takes place this weekend. It's at the Schloss Ballroom in Neufriestadt.

You are invited to spend an 'Evening in Morocco' as we celebrate the Confederation of Democratic Sims' 34th Term and welcome our new Chancellor and Representative Assembly members! Tunes by our own Callipygian Christensen.

The event is on Saturday December 5, from 12 to 2PM SL time. Tuxedos and ball gowns, or Middle Eastern attire, is preferred. - http://maps.secondlife.com/secondlife/Neufreistadt/230/198/189

The third thing going on, that would be the weather and the look of the community. With December has come winter, and snow has fallen onto the community land. 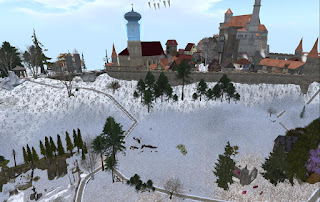 I awoke in the middle of last night to howling wind in the NFS Valley. By morning most of the leaves were down. And just like last weekend we have some light snow. My dogs are excited and trying to catch flakes in the yard. This time it seems to be sticking, at least in the higher elevations. I'm going to bring the rest of my kitchen herbs inside before they freeze. Guess it's time to sharpen my ice skates and wax my skis.

I knew it was going to snow last night. I could feel it in my bones. I had no idea how big it would be! Snow everywhere in NFS and Friedsee, and even throughout Monastery and AM. There's even a light dusting in parts of LA and CN. I didn't get the leaves raked in my yard so they'll compost in place until Spring I guess. If this weather pattern holds, we'll soon have skating and skiing in the CDS.

As the announcements suggested, there may be some skating and skiing events soon. But if nothing else, the snow is pretty to look at. Unless perhaps if you're from a place in which every snowfall means a lot of shoveling.