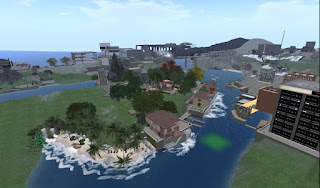 One of Second Life's longtime urban areas, the East River Community on the continent of Sansara, is retreating to a fraction of it's former self. In December, it was posted in the forums, "The ERIA city area, with the big airport and tram system, apparently reverted to (Linden Lab)." Someone else responded, "one or two major landowners left, and one of those landowners had the land that the airport was on. Apparently they weren't able to find new investors to save it. As of a week ago, it was predicted they'd be losing about 75% of the land in the community, but I don't know the current status. Hopefully they were able to save a smaller area to regroup and continue on." 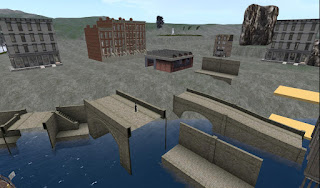 As the days went on, land began to be cleared, and "It's a mess now. The RapidER transit system still has a few stations and tracks, but they're not connected. Roads end in midair at the edge of properties in Grizedale and Helvellyn. Somebody is starting to build where the East River International Airport used to be, but it's very basic building. East River Municipal Airport is intact, for now. The big suspension bridge and its roads, which are not Linden roads, are still up, with signs for places that no longer exist and bits of RapidER track." There were a couple auction winners whom wanted to preserve community builds.

In March, it was posted more land was reclaimed. When Daniel Voyager visited, all he could see was the Villas of Helvellyn.

The Free Town of Helvellyn is a charming community with a distinct Southern European flavor. We are a nautical community and a safe harbor for your Mainland cruises. We offer art galleries, a cafe, live events, residential and commercial 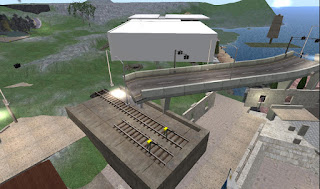 Dropping by Helvellyn myself, at (203/154/23), much of the area was still intact. This included the Rill'Arts Gallery, a couple ships, a drawbridge not far away. But it was clear much had been lost. To the northwest, there were segments of bridge, and some buildings were floating or on rough land without any sidewalks or anything next to them.

Most of Murihead was gone, save a stretch of beach, roads ending just past the sim border and the terrain dropping in height. Much of Munck was gone. Brooks was cleared and bought by someone. Kirkstone seemed mostly intact, but a stratch of bridge was missing and a building looked partially disassembled. The southern part of Grizedale looked like someone was rebuilding the area. Most of Hardknott looked cleared, though there was a wooded area left, and the coast had some walkway and beach. Whinlatter looked intact. 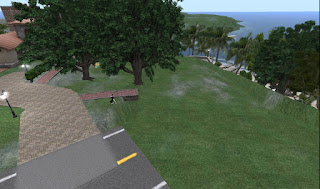 It should be noted, East River was threatened with trouble like this before. In Feb 2017, Daniel Voyager reported that the founder of the community was having to soon stop his land tier payments, and was hoping others could take over. Thankfully in that case, others were able to take over and give the place as it was  Sadly, while it seems East River will survive this crisis, much of the land will be gone.