Those in the Relay for Life in real-life may be familiar with "Bid Me Bald" in which someone offers to shave their head if so much is raised. Second Life also has "Bid Me Bald" events in which an avatar offers to go without hair for a while, how long depending on how much was raised. But with furry avatars, going without head hair doesn't seem so drastic when you're covered in fur. So the mostly furry Team Sunbeamers has had variations of the "Bid Me" theme. And this year will be no exception. This week, three volunteers have put their virtual looks on the line for charity. 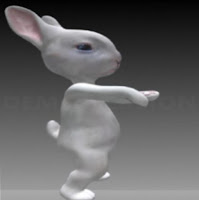 Each of the bid me events involves a pair of kiosk. The one on the left serves as the "default" to keep the volunteer as is. To make them change, people donate to the kiosk on the right. If the left one is the highest at the end of the bidding period, the volunteer has to change their appearance for a while. All six of the kiosks are at Club Cutlass in the room behind the dance floor area.

Two of the events are "Bid Me Tiny." Team Captain Rita Mariner is offering to go as a pint-sized white rabbit for a while. For every 5000 Linden dollars, rounded down, donated into the tiny kiosk, she will be limited to the tiny white rabbit (and other tinies) for that many weeks. For example, if 14,999 is donated, she only has to spend two weeks looking at people's kneecaps while 15,000 means three. 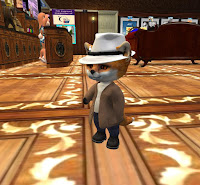 Bixyl Shuftan is also doing a "Bid Me Tiny," offering to go as a dinkie fox, or one of a few other tiny avatars. For every 7500 Linden dollars, rounded down, he will be limited to them for that many weeks. He as two outs. One is when he is obviously working on something for the Newser, such as conducting an interview. As he also helps out in running the Happy Vixen beach club, he may change to another avatar to help fit with the theme. Otherwise, he goes about pint-sized.

Liska da'Lantros (LiskaDaLantros Resident) is the volunteer for the third bid me event, "Bid Me Deer." For every 4000 Linden dollars, rounded down, the vixen will be made "into venison, I mean a deer" for that many weeks. 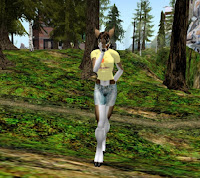 People have until Saturday April 16, presumably when the party that evening ends at 8PM to make bids on these three. Then the totals will be made final and the winners announced.