A few days ago on Tuesday March 22, Jessica Lyon of Team Firestorm announced the release of their latest version on their blog: 6.5.3.65658. She would also announce it in their inworld group.

A new update with some GAME CHANGING FEATURES!
Grab it before the servers cook!

Firestorm 6.5.3.65658 is finally in the wind! Wow—it’s been a struggle to get this one out, folks. But the wait is worth it, as this release comes with a couple of groundbreaking new features we’re really excited about. It also brings us to parity with LL’s 6.5.2, quite a jump from our last release, which was AGES ago. This is a major update. 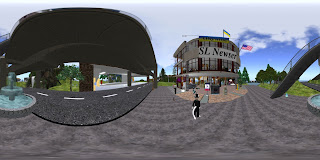 As stated, this latest update brings Firestorm up to parity with Linden Lab's latest viewer, and there's two notable new features. One is the option to take 360 Snapshots, which Marcel Mosswood wrote about last month when it was in a test viewer.

Another noted feature is the Performance Floater and Autotune, which can help in telling you what around you is causing the most lag.

The Performance Floater shows you in real-time what parts of the scene are taking the most time and slowing down your graphics (lag). In particular, this first release focuses on avatars and allows you to see which avatars are truly lagging you, and also allows you to examine your own attachments to see how they perform.

The FS Performance Floater is loosely based upon a project viewer from LL, released last June. We have completely revised the metrics behind the floater to make sure that it offers a realistic account of the rendering costs that you personally observe.

Autotune. This is the first look at this new feature. Wholly developed by Beq Janus, Autotune allows the viewer to automatically manage some of your graphics settings in order to give you the performance level that you request, and keep you there. It’s like autopilot for lag! You set the target FPS (frames per second) you want, and Autotune will do its best to keep you there by dynamically adjusting your settings from scene to scene! However, it cannot work miracles, if your computer is ancient—it can only do so much.

When TPing to a social island with a number of avatars most, of the viewer's time was spent drawing them. Clicking on avatars nearby will show how much processing time is spent on each. It also shows your avatar complexity in detail, how much time the avatar's parts are needing to render, It shows the impact of any HUDs on you, and a shortcut to looking at and edjusting your graphics settings.

There are known issues with the Mac and Linnux versions of the viewer. Also, the "Starlight Skins," an appearance option for Firestorm viewers (SL wiki link) will soon no longer be supported.

As per their deal with Linden Lab, Firestorm 6.4.12.62831 will be blocked from accessing the Grid in three weeks.