More Reactions By Residents To The Invasion of The Ukraine

It's been over two weeks into the Russian Invasion of Ukraine, which has turned into a slow but bloody advance with two million (as of now) women and children fleeing the country as refugees. There has been plenty of reaction to it from around the world, as well as within Second Life. Earlier, the Newser reported on a demonstration, as well as flagmakers giving away Ukrainian flags.  The latter has certainly encouraged the country's blue and gold banner being seen across various places inworld. Linden Lab itself has also stepped in, saying Second Life residents from the Ukraine would get a break from paying tier and premium accounts for at least 30 days (which will likely be extended unless the war ends soon). 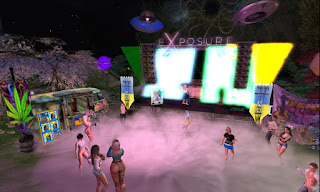 There have also been efforts beyond symbolic support. On Saturday March 5, there was a "Peace Rally in Support of the People of Ukraine" at Exposure Park in Lono Ku. From 2 to 11 PM SL time, eight DJs performed for the crowd. "Ukraine facepaint" was available at a booth at one side of the concert area. Donations were made to a kiosk showing the schedule and had a picture of a child waving the blue and gold flag, stepping on toy tanks. I was invited over by Nance Clowes, whom was encouraging the people to donate, "We wanna send (DJ) Rapa home with a happy 500k smile. ... So much Love pouring in for Ukrainians who have lost it all. YOU are giving them Hope back." "Not just for the childs," the DJ spoke, "for all Ukraine. All is suffer, child, woman, men, pets, all." 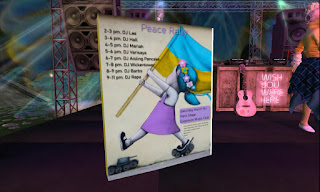 In the end, they more than met the half million goal. A total of 533,972 Linden dollars was raised. "You did great, and keep it going!!! Peace for Ukraine!" After the event, I had a few words with organizer, MrZogs Resident, who told me the donations were planned to be split between the Red Cross and UNICIF. "What a journey," he told me, "from a idea on Sunday morning to this. Only one artist said no and we had many wanting to get scheduled in."

They also encouraged people to donate off Second Life, pointing out the UNICEF USA and Red Cross websites. 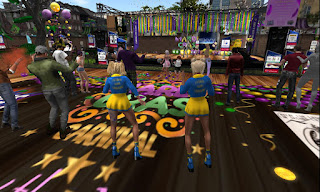 At the Relay for Life's Home and Garden Expo, there was a shop for Ukranian artist Tara Aers at  Hope 8 (166,55,23). There was one noteworthy discussion in Home and Garden chat that I overheard. Some wondered if there should be an official statement of support. Others weren't so sure, wanting to keep international conflicts and politics out and concentrate on fighting cancer. But there was a general agreement that individuals could show support in small ways. I've seen various people wearing blue and gold shirts and other clothes and items, such as ribbons and cloth. One of the shops at "The Guild" shopping event is also Ukrainian owned. 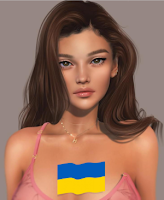 For one Ukrainian resident, however, the situation has become truly serious. New World Notes reported that Hana, the owner of Osmia, lives in one of the cities that came under attack, then occupation by Russian forces. She had gone from posting pictures of Second Life fashion on her Flickr to pictures and video of her hometown under attack and of the shelter she's taken refuge in to keep from getting killed from shelling and bombs, "The contrast is surreal and wrenching." To complicate matters, she's also six months pregnant.

She would tell Hamlet Au, "Honestly, I don't know what to write to you. Children, families die, people disappear (they are found shot in their cars)... my city is surrounded. Now I don't know what this will lead to." Later, she would write, "my city is occupied. There are a lot of soldiers and equipment on the streets. We don’t go out because they can kill." Her access to Second Life has been cut off, and her Internet connection is sporadic." With her access to Linden dollars cut off, she suggested another way to help would be to donate to the National Bank of Ukraine to help fund it's armed forces.

Posted by Bixyl Shuftan at 9:01 AM