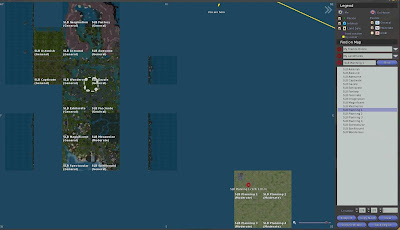 For those wondering when the Second Life Birthday sims will appear on the map, they already are. On the map are 18 sims labeled SLB. Fourteen have names from SLB Astonish to SLB Wonderous. Four are simply called "SLB Planning 1,2,3, and 4." They are in two separate groups, with the Planning sims in a smaller one to the southeast, with unnamed water border sims near the main group.

As to where they're located, they're far from the main groups of private sims, and very far to the southwest of the mainlands. Access is of course blocked to regular residents.

It's unknown when they'll get the name SL19B, or open to exhibitors. Last year, the sims were broken up into groups until just before the event, with exhibitors not being able to see much more than the sim their build in the days before the opening.