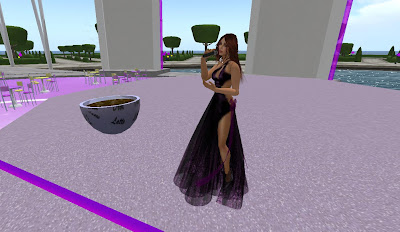 I haven't seen as much of the SL8B as Gemma and Grey, and progress can be slow due to the lag from all those people. But I have seen a little. This includes when my friend singer Debi Late performed live at the Cake stage on 6 SL time Tuesday night June 21st.

There were a few dozen whom showed up, causing a bit of lag. But that didn't spoil things as long as we had the music stream on, and her velvet voice was there for all to hear. Her chaacteristic coffee cup tip jar was soon flowing at the brim. Unlike her performances at Mystery, however, it didn't linger on "naughty numbers."

Debi Late will perform live again on Sunday, at the Mystery sim at Noon SL time.